I know.  I’m a lady.  But it’s not my expression. That’s what my mentor, John Moubray, called it.

And he didn’t apologize for it when he used exactly that term during a one-on-one mentoring session with me.

And to this day, it’s one of the most valuable (and profitable) lessons he ever taught me.

And it can help YOU gain control over your equipment.

The best way I can explain F-off power is through my own story.

I promise that this IS applicable to your assets AND Reliability Centered Maintenance (RCM), so please stick with me…

…I was deep in a 100+ person, No Limit Texas Hold’em poker tournament at the Aria casino in Las Vegas, Nevada. Nine players were left but only eight would “cash.”

I was the short-stack at the table. (In poker lingo, that means I was the one with the smallest amount of chips.)

And at a poker table, chips are the only thing that matters. The more you have, the more powerful you are.

I was careful and bided my time until one more entrant was eliminated, and I squeaked “into the money.”

That’s when I decided to implement what John taught me.

Here’s F-off power in a nutshell: The one with the “highest need” has the “least amount of power.”

Obviously the one with “high need and low power” is at a distinct disadvantage.

So as soon as I made it into the money, I decided that I would risk elimination in pursuit of a higher cash. I was willing to lose, and that put me in a more “powerful” position.

I chose my spots wisely and went “all-in” on three occasions – each time risking my entire stack on a single hand.

All three times my opponents folded, and I won the blinds and antes…enough to keep me “alive.”

After 35 minutes of eight-handed play, the massive chip leader (and thus the most powerfulplayer) at the table, announced that he was hungry and suggested a “chip chop” so he could “go to dinner.”

That meant that, if everyone agreed, each remaining player would receive the percentage of the prize pool that corresponded to how many chips each had.

We all agreed to hear the numbers. I told myself that my “number” was $600. Anything less than that, and I would risk elimination and continue playing.

At the Aria, to avoid any recrimination, each player is given a “yes” and a “no” plaque. Each player votes by putting one of the plaques face-down in the middle of the table. It must be a unanimous vote, or no chop is allowed.

With one quick swish, the dealer fanned the plaques on the table face up. There was one “no” vote amongst seven “yes” plaques. 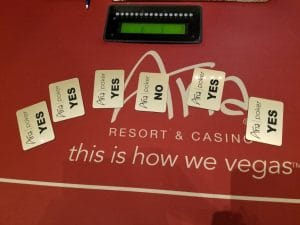 And it was mine.

But nobody knew that.

The hungry chip leader grumbled and asked who the “no” vote was. I remained silent.

The hungry chip leader grumbled and asked who the “no” vote was. I remained silent.

No one suspected it was me because usually the short stack – the one with least amount of power – wants to chop.

The hungry chip leader didn’t realize it, but he relinquished some of his power. I knew he wanted the tournament to end and I used it to my advantage.

The eighth player was eliminated and the seventh quickly followed.

Six players remained. The next one eliminated would earn $560.

The hungry chip leader called for another chip chop.

In my mind, I decided that I would chop if my portion of the prize pool was at least $800.

The floor man read us the numbers. If I agreed to chop, I would get $790…I smiled and told myself “no.”

Again, only one “no” plaque graced the table.

But still, no one suspected it was my vote.

Now I had even fewer chips remaining than before.

The chip leader wasn’t just hungry. He was frustrated, too. He really wanted to go to dinner.

So as the dealer was shuffling the cards for the next hand, the hungry chip leader suggested an “even chop.”

That meant that the entire prize pool would be distributed equally amongst all remaining six players, regardless of chip stacks…$1,428 each!

As soon as he said it, as nonchalantly as I could, I told him I thought that was a great idea and that maybe that would sway the “no voter” to vote “yes.”

Ellie, the lady playing next to me whom I became friendly with, said she would agree, but she didn’t want to waste any more time with another vote. She assumed that whoever was voting “no” would probably still vote “no.”

“Come on Ellie,” I coaxed. Let’s give it one more try.

We all voted for a third (and final) time.

With one quick swipe, the dealer fanned six “yes” plaques on the table and I earned $1,428 – nearly $1,000 more than if I had made the first deal an hour earlier.

So, what does this have to do with our equipment?

You see, when you do RCM, you take control.

…AND you decide how to manage them.

That means you only assign technically appropriate scheduled maintenance tasks and their associated frequencies.

But it’s not just about maintenance.

When you do RCM, you identify your asset’s vulnerabilities that may be putting your organization at risk, and you decide how to manage those, too…

So, what does all this mean?

That’s right. YOU hold all the chips. YOU have all the power.

And you get to have dinner whenever you darn well please!