My ‘not-so-dirty-little secret’, the Essence of RCM, and Risk Assessment all at once…

I’m going to tell you a not-so-dirty-little secret about myself.  I love No-Limit Texas Hold-‘Em poker.

I’m a tournament poker player – not cash.  Every year at Thanksgiving, my husband and I journey to Las Vegas to indulge in my favorite hobby.

Deep into a poker tournament, the best players have a mountain of chips in front of them.  (I usually only manage to accumulate a ‘hill.’)

I’ve had my share of tournament cashes, but I’ve never “hit it big.”  So my goal this year was to make a ‘five-figure’ cash.

Fast forward to day three of our trip.

While getting ready for a tournament at the Venetian, I happened to have the sitcom Seinfeld on the television.  It was the episode where George Costanza does everything “opposite” of what he would normally do in an effort to turn his life around for the better.

You see, I’m a decent player, but I err on the conservative side.  I don’t take big risks at the table.  But big risks are what get you a mountain of chips.

So there it was.  I would be like George and do the opposite of what I would normally do in “risky” spots.

But I had to temper the strategy and, as I finished putting on my makeup, I decided to do so using Reliability Centered Maintenance (RCM).

(I told you RCM principles are versatile!)

I assumed (correctly as it turned out) that one of my opponents had flopped a Queen-high straight and the other was on a smaller flush draw than I.

(Sometimes you can just feel it.)

In my mind, RCM rode in on its white horse to rescue me.

If I call and make my flush or a better straight than my opponent, I more than triple up and start to build my mountain.  If I call and miss all of my outs, I’m out of the tournament.

Now on to risk.  What’s my risk here?

If the assumptions I made about my opponents’ hands were correct, I had about a 40% chance of winning.  Not horrible. (We’re talking about poker, not a fire suppression system.)

So, in the context of RCM, was I willing to accept the consequence of being knocked out of the tournament in this particular scenario?  And, was the level of risk acceptable to me?

I announced “I’m all in” and my opponents grumbled.  One because he had to fade a better straight or a flush – and the other because he was holding 5, 4 of spades.  He was drawing nearly dead.

My heart raced – but not for long.

The dealer quickly peeled off the deuce of spades on the turn and I won the hand with the better flush.

The dealer pushed me the pot and I silently thanked George.

I used the same strategy for the next six hours:  consequence and risk assessment.

Then I got into a hand that made me my “mountain.”

I was first to act and raised with AJ of hearts.  It folded to a guy who announced he was “all in.”

Hmmm….I thought.  Stereotypically, a man can get a woman to easily fold with a big bet – unless she has a monster hand (which I didn’t).

But in this particular hand, I wasn’t Nancy.  I was George.  And George does the opposite.

My opponent could just be making a move with an inferior hand just because he thinks I’d fold.  Or…he really could have a better hand.

Here was my risk assessment.  If he’s just trying to push me around, I have about a 70% chance to win.

But I still had a chance – no matter what he held.

I silently asked myself:  “Are you willing to accept the consequences of getting knocked out in this particular spot?”

“Is the level of risk acceptable to you?”

My opponent slammed his better hand down on the table – Ace, King of clubs.

I stood up and turned over my AJ hearts.  Ughhhh…only a 30% chance to win.

The dealer burned the top card, swiftly counted out the next three cards, and then quickly spread them face-up on the table.

Some players gasped.  Others yelled “no way!”

It was nothing less than a poker miracle.

Not only did I flop my flush… 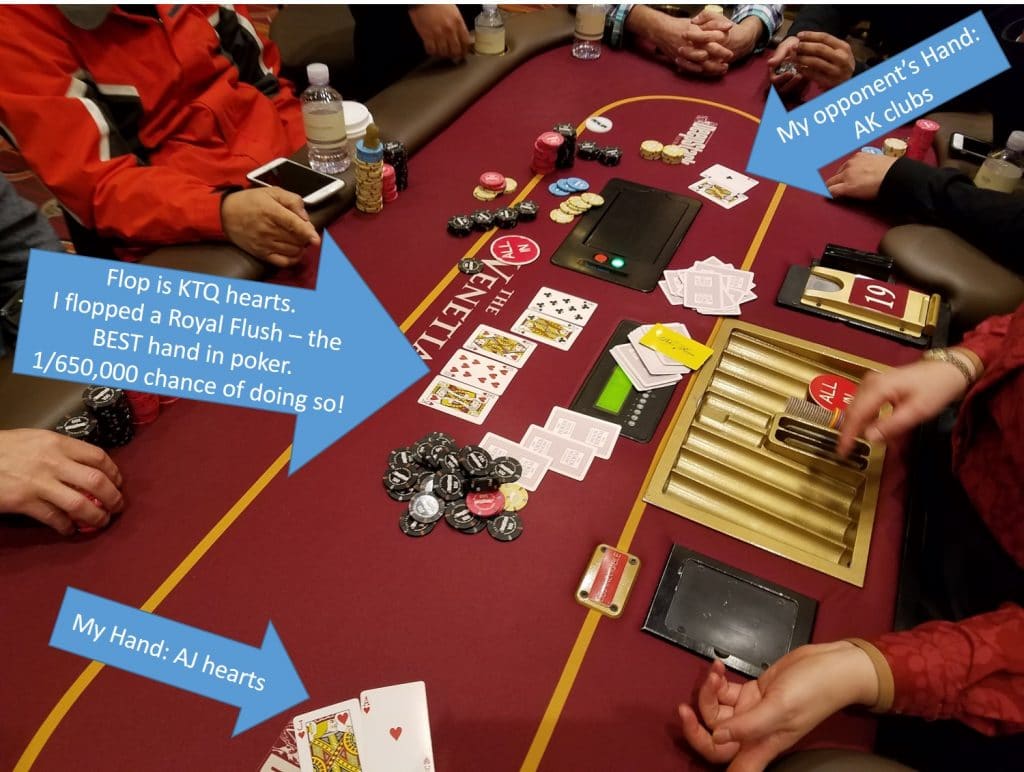 I flopped a Royal Flush – the stone-cold “nuts.”  The absolute best poker hand.

He yelled at me and said I was “stupid” for calling.

But it wasn’t me he was yelling at.

The dealer pushed me the pot and I gleefully stacked over 180,000 in tournament chips.

I continued to play the same strategy – and the poker gods remained on my side.

That night, I bagged up 426,000 tournament chips to finish play the next day.

Early in day two, I accumulated 990,000 tournaments chips (my personal best) using RCM principles (and by being George).

I finally made my mountain!

And then, just like that, it was gone.  My poker luck ran out.

It wasn’t my fault – or even George’s.

It was just poker.  I played it right.  But my hand just didn’t hold up.

Although I didn’t make a five-figure cash as I had hoped, I did pretty well that day.

And I owe it all to Reliability Centered Maintenance – and of course – to George!

So the next time you want to change the oil quickly and don’t want to take time to put the jack stands in place, ask yourself if it’s worth being crushed to death.

Or how about forgoing safety glasses because the job you’re going to do in your home wood shop is quick and easy?  Is it really worth your sight?

My worst case scenario was being knocked out of a poker tournament.

What are the consequences?  What’s the risk?

They may be the two most important questions you’ll ever ask yourself.